The mystery calendar was a little light today: just a toffee penny, and the buttons from the snowman. 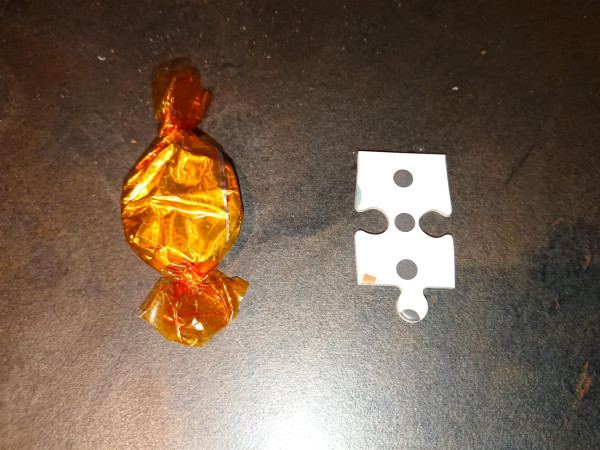 But that's not all! Today was our annual housegroup secret santa! Now we couldn't meet up in person (because Covid), so instead the D's kindly ordered pizza to be delivered to everyone and we'd even arranged a socially distanced secret santa - we all dropped off presents at someone's house, and then picked up our presents a day or two later (I wonder what their neighbours made of us all raiding their porch?).

Whoever got me as their secret santa knows me well, as I got this... 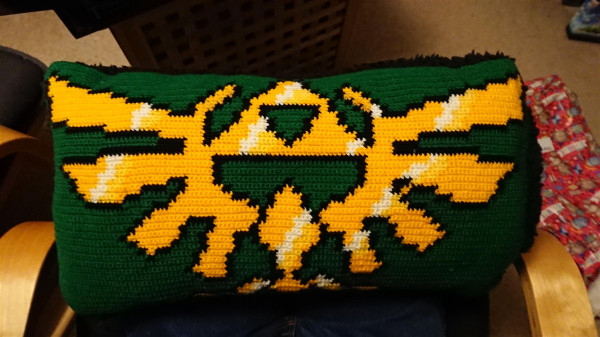 Yes, that's a small pillow/cushion with the Legend of Zelda crest on it! Thankyou, mystery secret santa!

My snowman has a face! 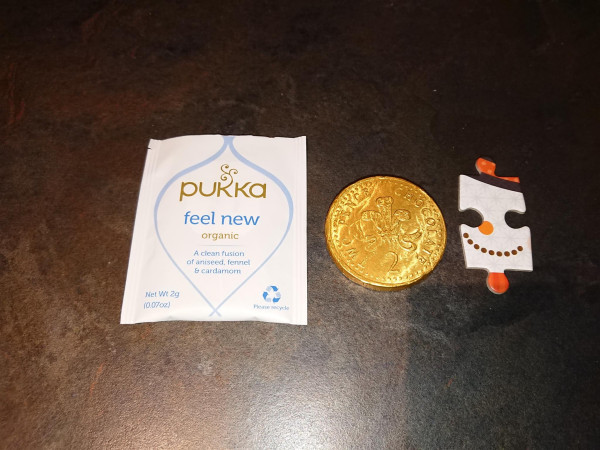 Into the final week now! 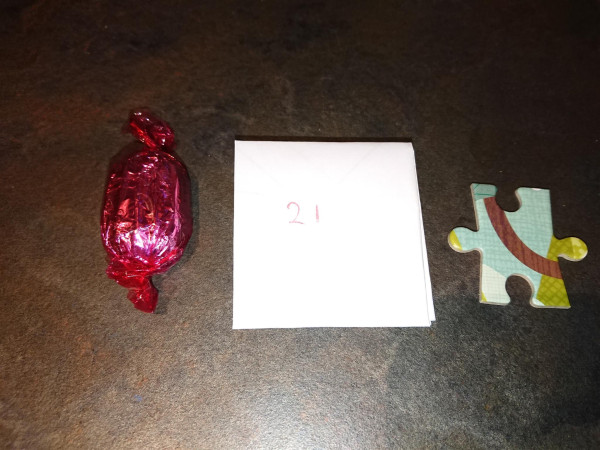 Today's origami: A fox, that hopefully will be just as cute as the mouse from last week. Meanwhile the jigsaw is taking shape - there's not much left to add to it... 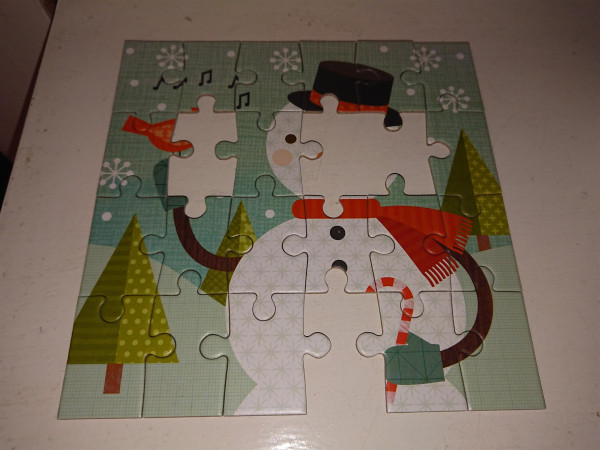 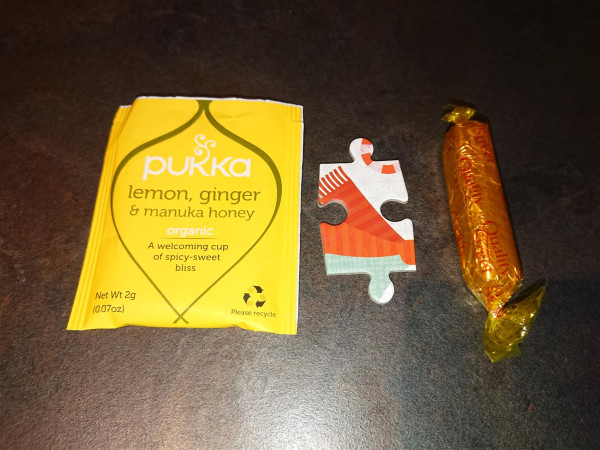 No origami for a change today, but instead a lemon, ginger & honey tea to go with a toffee finger and a piece of the snowman's scarf.

As I've tried to do most weekends I headed out for a randomish walk - well, this was less random than usual as I had a selection of Christmas cards to deliver locally, a few more to post (some internationally which have epically missed the last posting date - so

omgimsuchadork, [Bad username: rustica> and <lj user=] you're probably getting New Year's cards instead :P) and a handful of parcels to drop off (which are just in time for the last 1st class post). And on the way I spotted this wrapped around a streetlamp: 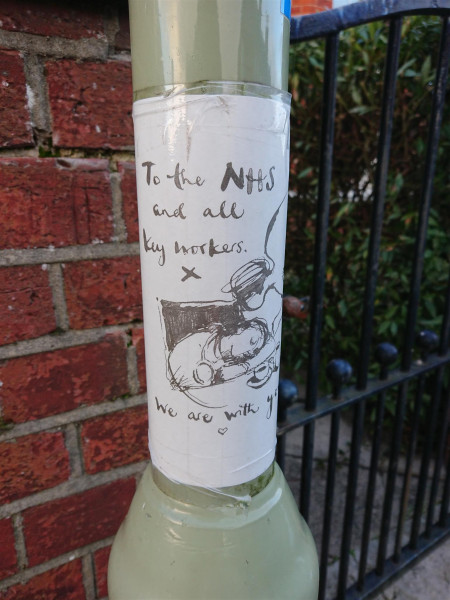 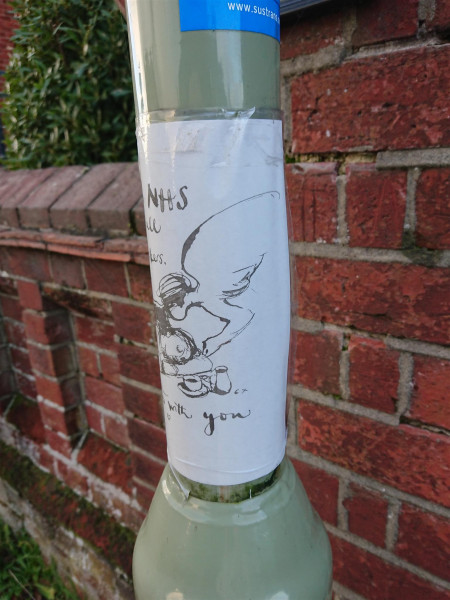 To the NHS and all key workers: We are with you Even more origami! Today's is I think for a pinwheel star.

Group dance
Today's superpower: summoning dancers in a futuristic club. And once you've got enough dancers, you can unleash a special move and summon the Strictly finalists!

Jamie and Karen: Judges' Pick: Charleston to Zero To Hero from Hercules
How they partied in ancient Greece! Disney's got nothing on Strictly 😁

Bill and Oti: Judges' Pick: Quickstep to Talk To The Animals by Bobby Darin
Professor Bill explains how to talk to animals through interpretative dance.

HRVY and Janette: Showdance: Boogie Wonderland by Brittany Murphy
Boogie woogie at the HRVY festival! And wow, those spins and flips.

Jamie and Karen: Showdance: I'm Still Standing by Elton John (Taron Egerton version)
Not how I expected it to go from the intro, but still impressive.

Bill and Oti: Showdance: The Show Must Go On by Queen
Wow. A very moody dance with a little of everything: magic tricks, spins, spectacular lifts, some of their Paso Doble - and was that a shout-out to Lordi at the end with the guitar pyrotechnics? And the first 30 of the evening to boot!

Maisie and Gorka: Showdance: We Need A Little Christmas by Idina Menzel
A Christmas celebration at Strictly, fit for a giant!

HRVY and Janette: Favourite dance: American Smooth to One (Singular Sensation) from A Chorus Line
Just as classy and sparkly as it was the first time around - with a well-aimed flung hat that got swiped by Motsi!

Bill and Oti: Favourite dance: Couple's Choice: Street/Commercial to Rapper's Delight by The Sugarhill Gang
The commuters are back, to seal deals through a dance-off.

Maisie and Gorka: Favourite dance: Quickstep to When You're Smiling by Andy Williams
We're still arguing over who gets the park bench 😅

Bonus dance: Nicola and Katia: Feeling Good by Nina Simone
That's a very moody and argumentative-looking dance. It's a shame they had to drop out due to Covid - I think they would have gone far.

Interlude: Time for Change by Robbie Williams
You can tell it's Christmas themed because it's snowing and all the dancers are wearing red 😅

Group dance
How to celebrate Christmas, Strictly-style! Includes a tree, flags, giant donuts, a bicycle, and a cat up a tree.

And the winners - well, you'll have to watch it yourself and see 😋

Bonus quotes
Craig: "I've decided to be positive. I know you might not recognise this new me..."
Craig: "Nine!" *boos*
Tess: "You are never getting your hat back off Motsi"

Only one week left until Christmas Day! Again, no photo of today's haul, which contained origami for yet another sheep (where did my sister find them all?) and a selection of chocolate.

There's another blog post incoming for today - I discovered that at Mottisfont they actually had the main house partly open as they'd decorated it for Christmas. So I took the day off work (partly because good luck getting a booking slot at the weekend, and partly because unsurprisingly I've got plenty of holiday left what with Covid cancelling everything) and meandered up there to have a look and enjoy a day of not doing much. I unfortunately picked a fairly wet day to visit, but I managed to dodge the worst of the showers and while it's not as impressive as past years it's still worth a visit. Photos to follow!

Day 17: An origami sheet for a very cute-looking mouse! And probably a jigsaw piece and chocolate - I didn't note down what they were. I think at this point I've had at least one of everything out of all of the advent calendars. 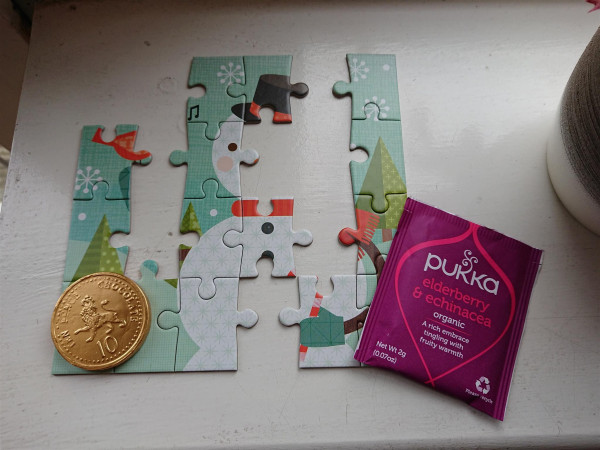 My snowman now has a top hat! Well... part of one at least :P

I've got a whole ten days worth of these to post! 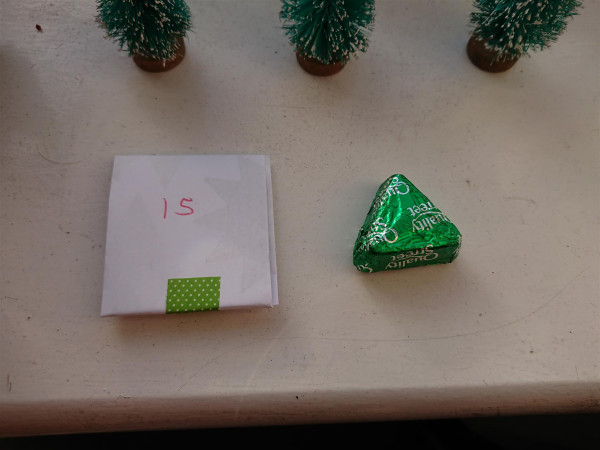 No puzzle piece today, but instead another origami sheet (for some sort of hanging star decoration? I need to find time to actually make all these!) and whatever the green triangle is. The other calenders contained another Lindt napolitain and this time an alpini praline
Collapse