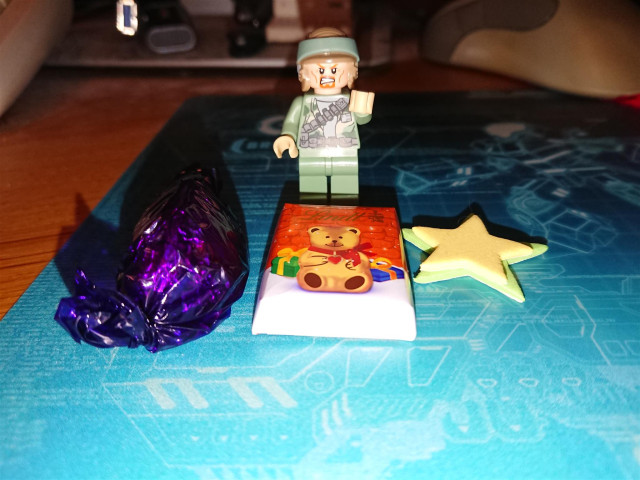 That was it - a rebel pilot claiming the chocolate for the Rebel Alliance!

Time to work out who to vote for! Actually, time for a rant first.

I don't want this to be an election based around who not to vote for, but certain candidates seem to be falling over themselves to offend large chunks of the electorate. I especially don't want this to be yet another election where making sure that one party loses is much more important than who actually wins, but apparently it's all about either defeating the evil Tories or the evil Labourites. The Tories will apparently destroy the economy through privatising everything, while Labour will apparently destroy the economy through nationalising everything. And the only way to fix this... is to "hold your nose and vote tactically" for the best-placed challenger, lest you suffer the wrath of the Twitter Rage Machine for daring to think otherwise.

How about, instead of trying to defeat any one party at all costs, we actually all go and vote for the party/candidate we each personally would most like to win? It'd be a much nicer campaign season if everyone was focussing on why we should elect candidates instead of why we shouldn't.

And if you get to the polling station and decide you can't support any of them, then go and write "none of the above, they're all idiots" on your ballot paper. It'll be officially counted as a spoilt ballot and will give one of the counters a laugh on election night.

Anyway, enough ranting, time to go and snark at what the parties have put out.


I've shuffled up the order, and first we get the SNP's latest film trailer for Scotland. It lulls you into a false sense of positivity before bludgeoning you with an anti-Westminster rant. Clearly everything is Boris Johnson's fault, and only the SNP are capable of sending a strongly worded letter to him or something.

Plaid Cymru on the other hand want you to know that they can achieve anything for Wales if only you believe. Aww.

The Greens... they've grown up. No cheesy video effects or glitzy song numbers, just a very effective 4-minute black-and-white monologue on politics, the climate, our future, and hope. I can't snark this.

Heading to the traditional 2.5 parties, it's the turn of the Lib Dems, jogging towards their destiny as the saviours of us all. Former Labour and Tory members welcome! But don't forget your shiny shoes.

Speaking of which, Labour seem to have forgotten that it's meant to be a party political broadcast, not a "why I am a farmer/doctor/firewoman" documentary. Oh, Vote Labour, and we'll, I dunno, do so something or other.

The Tories have bravely decided to interview Boris. Like all good Boris interviews, the answer to every question is a buzzword bingo of "paralysed Parliament", "coalition of chaos", "get Brexit done" or "oven ready". Oh, and he likes Marmite, and can't get takeaways ordered to Number 10.

Finally, it's the turn of Nigel Farage's comeback tour the Brexit Party, who seem to have given up aiming for first place and are settling for maybe having some say over Brexit, pretty please? Oh, and we'll fix the NHS.


And the verdict? Plaid Cymru have the most heartwarming clip, and the Greens the most anvilicious one.
Collapse