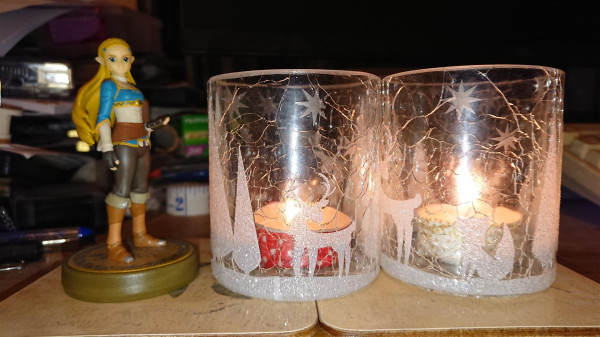 Another pair of tea lights to burninate (and there'll likely be two tomorrow as I've only just got back from housegroup and lit today's), with a Zelda Amiibo looking on because it's on my desk and why not? There's a thought for you - is there Christmas in Hyrule?

And now for something completely different: I was digging through old files to find something for a friend in housegroup and stumbled across this gem: 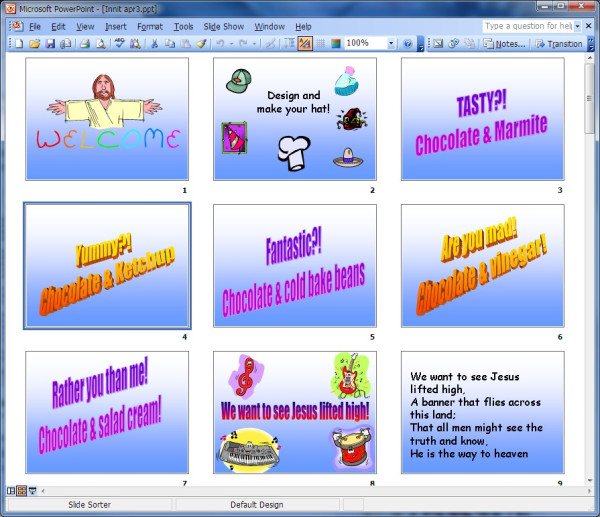 It's from one of the "Innit" youth services that the Horsham churches used to run around 14 years ago... and knowing the leaders, the service probably did contain those chocolate combinations. Chocolate and marmite I can see as plausible (if you're one of those crazy people who likes marmite)... but chocolate and salad cream?

Going through all the Innit powerpoints brings back memories - I somehow ended up involved in running the a/v for some of them and putting together powerpoint with words in those pre-SongPro days. These were held at St Mark's which I recall had just got a shiny new projector setup (along with a set of new UHF radio mics that no longer shared channels with the pub across the road) - back then, St John's was still using OHP transparencies for the hymns. Then again at least an OHP projector won't decide to install windows updates 5 minutes before the service is due to start...
Collapse