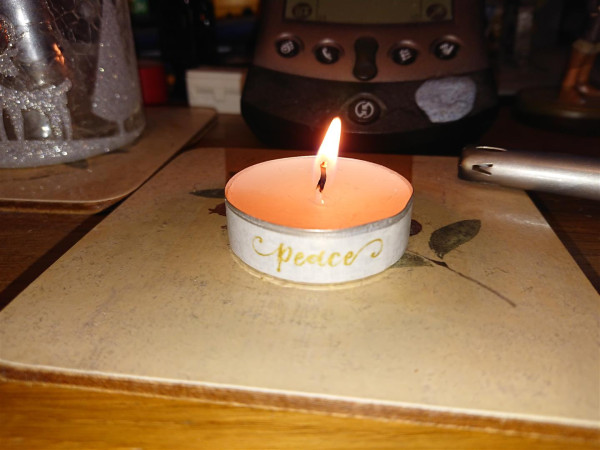 A good message for Christmas.

No origami today, just a chocolate in the surprise calendar. And I spotted Sainsbury's are selling off what's left of their advent calendars at half price, so I picked up a Lindt one as well (because MOAR CHOCOLATE). See, there is an advantage to completely forgetting about getting an advent calendar until well after advent has started!

Tonight I played just the one round of Dominion (combining the Intrigue and Seaside sets) with Matt and Kyle (while the others got stuck in to Agricola - having watched them play, I want to give that a try as well). Unusually I managed a runaway victory with 47 victory points, so go me!

We all played with very different tactics. Matt did his usual trick of turning coppers into silver and gold, which he then used to buy provinces outright out of treasure in hand each turn. Kyle put together a very effective engine for producing 6 money each turn which he spent on the harem card (costs 6, worth 2 money and 2 victory points). I however had spotted the pirate ship card and aggressively bought those, which I then used to steadily increase the tokens on the pirate ship scorecard. This worked out very well in two ways: once I'd built up about 6 tokens, the second ability of the pirate ship became useful and I could reliably buy a province a turn. And the first ability was moderately useful in slowing Matt down by trashing odd treasure cards, but utterly crippled Kyle's deck by turning his harem cards into liabilities. Since a harem counts as treasure it's vulnerable to the pirate ship ability, and the luck of the draw meant I was forcing him to trash them almost as fast as he was buying them. It didn't help when all the harem cards had been bought and Kyle's deck suddenly found itself with never quite enough money for the provinces needed to stave off myself and Matt.
Collapse