What did I do at the weekend? Oh, just went a bit ape up in the woods... 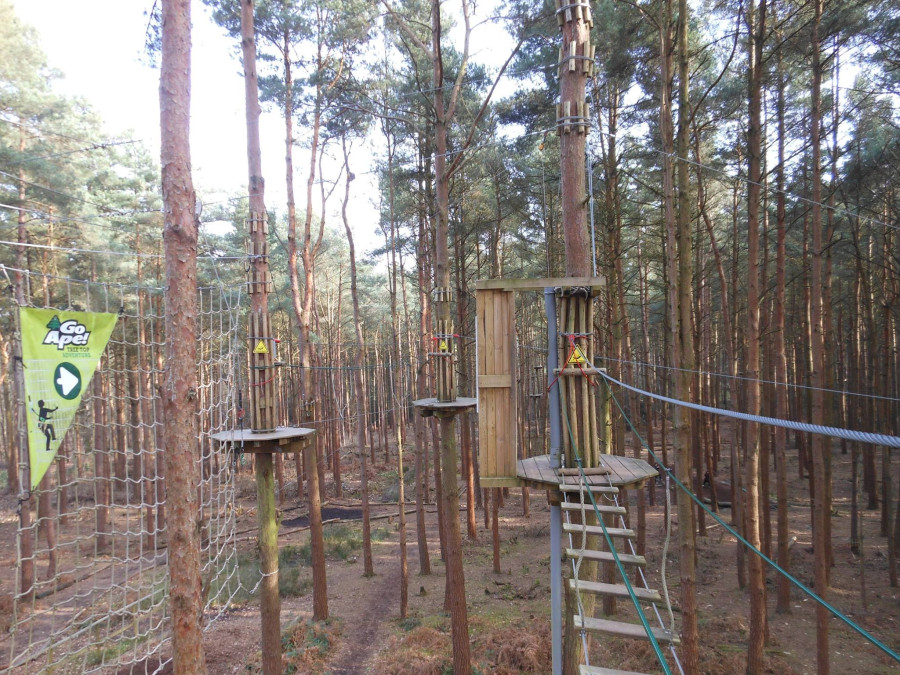 This all started a couple of years ago. I don't know when I'd first heard about Go Ape but for quite some time I had been thinking it would be a fun thing to do, so for my 30th birthday instead of the traditional birthday karting I arrange with the extended pasta night group I suggested Go Ape instead. What with one thing and another it didn't actually happen near my birthday, but instead in March last year (the Facebook event ended up saying "I'm fairly certain that Go Ape will happen before my next birthday"). 'Twas great fun and we unanimously agreed that we should go again sometime.

So on Saturday we did just that, and met up at Tilgate Park to once again tackle the treetop adventure. After much car park fail (seriously, the entirety of Crawley must have been at the park at the weekend) we ended up spread across two booking slots, but managed to arrange things so that one lot hung back at the first slot and the others were at the start of the second slot so we could all do the course together. Memo to self: next time, just park at K2 and walk up.

It's an odd mix of obstacles and crossings they've got in the course. Some of them are so easy that you can almost run across without using the ropes for support, while others are very hard (there's one with diagonally supported logs that I struggled with). The bosun's chair crossing (a slightly downhill slanted main/anchor wire with a rope hanging beneath to pull yourself along with - almost a mini zipline) was actually quite fun despite having nothing at all to stand on, while the scariest one for me was the tarzan swings, because of that moment at the start of the swing when you just drop before slamming into a rope net at a surprisingly fast pace. Climbing that rope net afterwards is hard work as well - it reminds me of the old Gladiators show and I've no idea how the contestants managed to make it look so easy.

All the segments end with a zipline which most of the time I started facing the right way and ended up landing sideways/backwards (with wood chip ending up absolutely everywhere), but on the final zipline I managed a running landing facing forwards! Go me!
Collapse