Minor bit of hilarity today: it appears to have come as a great surprise to The Powers That Be that certain parties (not me, at least not yet) might not wait for the Process to advance to the next phase, given the uncertain timescales and the expected outcome.

I don't know why I'm avoiding spoilers in the title, surely everyone knows the plot by now...

Link is coming to save us all! ...I can feel it!
Colin

As it happened there was no pasta night on Monday gone ('twas properly foggy all along the south coast and inland, and so I decided against the drive - it was bad enough just getting to/from work), but the week before the voteamabob threw up Dominion as one of the games to play. We played two rounds with randomly selected cards from the Intrigue and Seaside sets . Now, with random selections sometimes you get a decent choice of cards, sometimes they're rubbish and don't combo at all... and sometimes you get this: 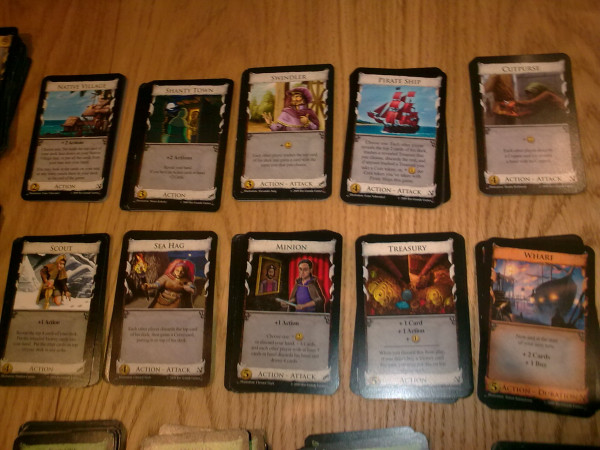 That's Native Village, Shanty Town, Swindler, Pirate Ship, Cutpurse, Scout, Sea Hag, Minion, Treasury and Wharf cards. And fully half of those are attack cards, with no defence available. The resulting game was vicious - I used a mix of Sea Hags and Swindlers to good effect (I think at one point I got Matt into negative points with the Curse cards from Sea Hag), while Jonners worked out how to use Pirate Ships to give everyone else cash-flow problems in the early game and buy Provinces at a ridiculous rate in the endgame.
Collapse