Time taken to change both dipped beam bulbs on an Alfa MiTo: 15 minutes or so.

The other morning while trundling to work I discovered that one of the headlamps was out (by wondering "why is one reflection dimmer than the other?" while paused at some lights). So, off to Halfords at lunchtime to track down a suitable replacement... not helped by Halfords, Bosch, and Alfa all disagreeing as to which bulb I need (for reference it's an H7 - the Bosch listing is wrong). Later on in a gap between downpours I had a go at fitting them.

Now, the manual is wonderfully vague when it comes to replacing bulbs, and merely instructs one to remove a cover, remove another cover, remove the bulb, and replace everything. What it doesn't tell you is the cover is a rubber cap that just pulls off (with a handy tab not-so-handily tucked behind part of the wiring loom), the bulb holder needs to be pushed towards the front of the car and rotated before it'll come out, and the bulb itself is a very tight push-fit into the holder with almost no way of getting any leverage on it. Especially on the passenger side where the proximity of the battery doesn't leave much space to work in, though that's partially my fault for fitting an oversized battery.

Still, could be worse - I could be trying this in a 159 which has no space at all to work in. And I managed it without losing any blood which is always an achievement when working on an Alfa. Hopefully the bulbs are still aligned correctly, though the upcoming service and MOT will take care of that if they're not.

While I was at it I also finally picked up a set of wiper blades - yes, I know, they're much cheaper online, but Halfords had them in stock and they really needed sorting. Unusually for anything involving an Alfa they were a piece of cake to fit, just unclip the old one and clip the new one in. And now my wipers no longer judder across the windscreen but just quietly swish across. It's one of those things where you don't realise quite how bad they are until you replace them.

The bodywork repair still needs sorting (consensus is the door can be de-dented, but the rear quarter panel needs replacing) - I got a few quotes by email, but they're so wildly different (low quote of £700, high of £2300!) that I think I need to actually pop round a few places with the car and see if that results in less insane numbers.

Having finally resurrected Nyx (which seems mostly stable - the graphics driver has only imploded once so far), it's time to turn my attentions to Aether. As tempting as it is to just simultaneously upgrade all the things, it's useful to have at least one (mostly) working computer.

And today's upgrade is... *rolls dice*... Windows 7! Because there's a massive question mark over hardware compatibility, I wanted to take a backup of the SSD first so I can roll back if it all goes pear shaped. And because there's a similarly massive question mark over the reliability of the USB-to-everything adapter I've got, I picked up a couple more tools for the bits box: 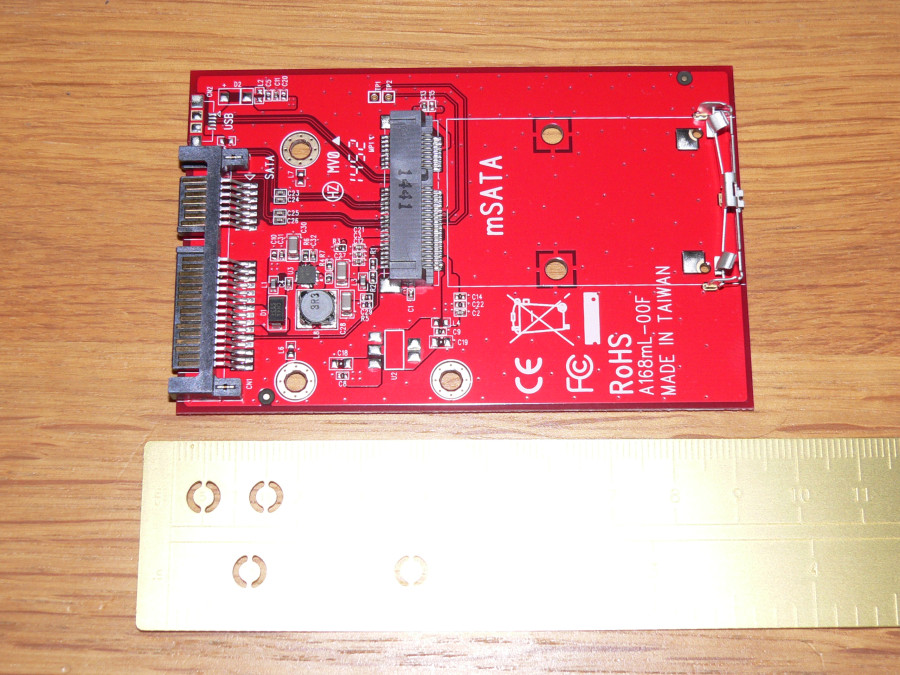 Yes, it's another mSATA adapter, and yes, the first thing I did when I got it was take the mounting bracket off so I could see what was underneath. This time it's mSATA-to-SATA and so there's merely some power circuitry... which is a bit curious, because the SATA power connector in theory does have a 3.3V rail. Except there's a lot of Molex-to-SATA adapters that only provide 5V and 12V, so I suppose one can't actually rely on it being present. Especially here where I'm using a SATA-to-eSATA/USB cable that only provides 5V.

That forms the other part of the puzzle - see, my desktop has an eSATA port, and so it made sense to go with that rather than plain USB as in theory it should be a lot faster (in practice it was merely somewhat faster). Since eSATA doesn't provide power I found a combined eSATA/USB cable that pulled 5V from the USB port, and so had the whole mess dangling off the back of Nyx. To actually image the drive I ended up using... *rolls more dice*... Paragon Backup and Recovery Free - using DriveImage is considered unwise in this day and age, and Acronis doesn't entirely get on with Nyx.

Even more curiously there's an unpopulated USB socket on the adapter. I wonder what that's for?

Anyway, once imaged I stuck the SSD back in Aether and fed a 32-bit Windows 7 DVD to it. I did contemplate doing a dual boot or side-by-side install, but realistically if this worked I'd stay put in Windows 7 land and not boot the old XP install. So I just told the installer to use the existing partition without reformatting (the installer did save a copy of the old Windows folder, which is a nice touch). The actual install was surprisingly easy, and even more amazingly Windows Update had drivers for everything short of the sound hardware. Including the ATi FireGL T2 graphics (which AMD have disavowed all responsibility for) and the Intel 2915ABG wifi (which Intel claims won't work on Windows 7).