Since the last set of upgrades I've been using the frankenlaptop heavily, as I've still not got round to repairing/replacing the graphics card in Nyx. Yes, I know, that was 4 months ago... I don't really have any excuse beyond procrastination. Okay, I have a slight excuse - I was going to buy a new card a few weeks ago (probably a GTX 750), but then nVidia released the GTX 950 and so I decided to wait a little and see what the Internets had to say. And the consensus seems to be that it's sitting in a very nice price/performance spot - it easily beats the GTX 750, and is very close in performance to the GTX 960 (close enough that I don't think the extra cost of the GTX 960 is justified). So that's that then. I've settled on the EVGA GTX 950 FTW, which happens to be the top-end one from EVGA - comparing the models and prices it didn't make sense to get the SSC or SC+ variants given the jump in specs for only a small increase in cost. The only downside is it's a twin-slot card and would block a PCI slot, but that's less of an issue these days since I'm no longer running an extra IDE controller card (having migrated all the hard disks to SATA over the years).

And since on a modern graphics card you're lucky to get one analogue output, let alone two, I am also finally replacing the ageing CRTs with a pair of LCDs (

pleaseremove was almost speechless when I mentioned this to him). I'm probably going to get a pair of Dell P2214H displays, chosen because they're IPS-based (one reason I did stay with CRTs is colour quality on LCDs is still often an issue), and because they have DisplayPort (the graphics card mainly has DisplayPort outputs).

That's about it for Nyx - to upgrade it any further would require a motherboard replacement, and to be honest a Core 2 Quad Q6600 is still a reasonable processor. However that's not the only system I've got... yes, Aether is also being upgraded (

pleaseremove's reaction to this news was equally hilarious - while Nyx is getting a cutting edge GPU, for Aether it's whatever I can scrounge on eBay). eBay has a few Pentium M processors for around the £20 mark, so I'll probably fit a Pentium M 755 for a nice 33% increase in CPU performance. While I'm at it I also intend to upgrade the heatsink - yes, this is actually possible! The reason behind this is the current heatsink/fan only covers the processor, while the GPU just has a little passive heatsink attached. This is not really ideal given that unlike the R50e there's a real GPU in here (ATi Mobility FireGL T2), and as a result that runs a good 20°C hotter than the CPU. Now it turns out that the R50-series and T40-series ThinkPads share a lot of structure, except the T43p has a combined CPU/GPU heatsink and fan. And it's apparently possible to fit the latter to a R50p with a minor bit of modding (trimming some plastic). For another £20 I think this is worth a try and should help it run a bit cooler.

Finally, Aether is also going to be upgraded to Windows 7. Probably Professional - Home Premium would likely be sufficient, but I'd end up missing the extra features from Pro. I've found drivers for everything, even the GPU (or rather Windows Update contains drivers for everything which is enough to get started with), so that's not an issue, and XP is getting increasingly problematic as more and more software these days assumes Windows 7 as a baseline. Firefox is an example here - some digging suggests that it does actually support video hardware acceleration in the form of DXVA2, but only on Windows Vista or later. So despite the higher system requirements the laptop should perform better.

Windows 10 is probably a bad idea though.

Long-term I'm waiting to see what happens with the new retro ThinkPad that Lenovo are considering. The currently crop of ThinkPads aren't actually that nice to use - $WORK has issued me a T440p with the worst touchpad ever (and the Trackpoint is hardly better because they removed the buttons for it) - but it looks like they're seriously considering releasing an actual ThinkPad. If and when that does happen then I may well upgrade to it, but given that it's probably a year away I think it makes sense to keep the R50p going.

Sigh... just as I decide to spend lots of money on computer bits for myself, the universe decrees that I should also spend money on other things. Fortunately I'm not broke and do have the money available, but it's still annoying.

First there's the car, which will be part of a separate post (suffice to say my first foray into a multi-storey car park did not go that well, and left the Alfa with some new dents and a collection of rather impressive-looking paint scratches - all from one concrete pillar that objected to my overconfidence). And just now, the table on my balcony self-destructed... 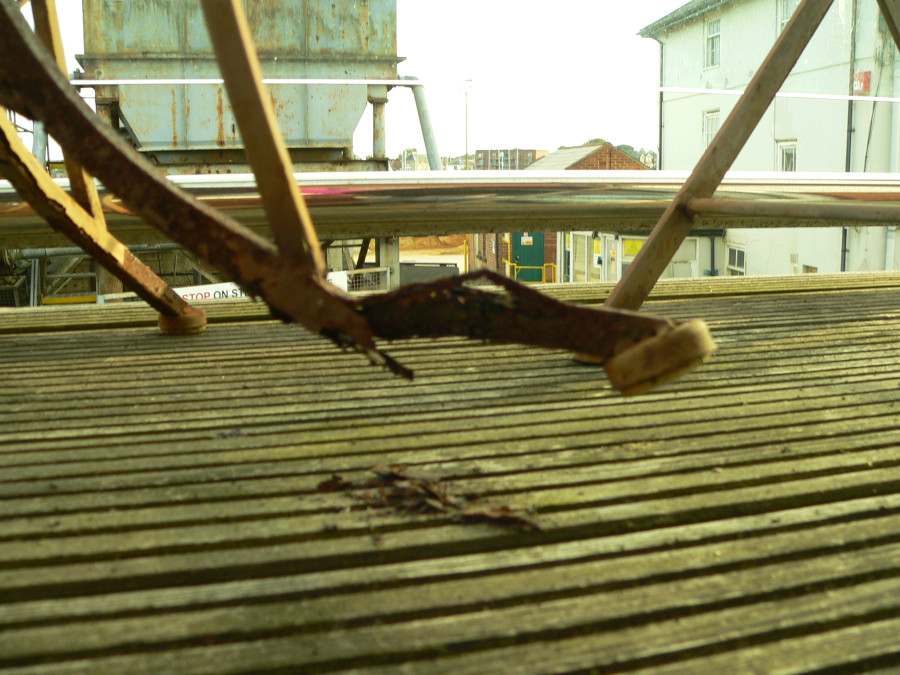 5 years of rusting gently in the salt breeze proved too much for the table, and when I placed a large bottle of screenwash on top that leg gave way, with the metal flaking apart in ways that one really doesn't expect metal to do. The rest of the stand is in a similarly bad state and probably not salvageable at this point. The chairs still at least seem intact, as does the tabletop (made up of a tiled surface set in a metal frame - it's considerably more solid than the stand, and rather heavy!), so perhaps some sort of replacement stand is possible.

August may well be a new record for mileage at 777.6 miles!

Tyres were the usual 0.05bar down on pressure, probably as much due to the unseasonably cold weather (predicted to be below 10°C tonight!) as anything else. The spare was slightly lower at 0.10bar down so that got topped up. Oil was somewhere around the 4/5ths mark which isn't worth doing anything about, especially given that it's coming up to the annual service.

And speaking of that and what I alluded to in the previous post... yeah, Swan Walk car park in Horsham has claimed another victim. I made the right-hander after the barriers without any issue, was fine on the next two left-handers... and on the third, took it far too tight and scraped the passenger side of the car along the concrete pillar. According to

elemnar I was driving like I'd driven there before (despite having never done so), and so paid for my overconfidence in the form of a collection of dents and scratches (slightly dinged corner of the door, somewhat more dented bodywork between that and the rear wheel, and more scratches than I'd care to admit on both). Whoops.

Somehow after that I did then manage to make it all the way to the top of Swan Walk and back out later without leaving any more paint behind, so I suppose that did teach me something about just where the back-left corner of the Alfa actually is. Looking back on it I think my problem there was a mix of not paying attention to how the rear moves during sharp turns (not something I normally have to worry about), thinking that the front sticks out quite a bit further than it actually does (and turning early as a result)... and being far too overconfident about the whole thing.

Still, it could have gone an awful lot worse. The damage is limited to the bodywork and my pride... and my wallet, though hopefully it's not too expensive to bash out the worse of the dents and touch up the paint. Since the MOT deadline is early OctoberNovember, my plan is to book the car in for a slightly early service sometime in the next few weeks and get both that and the bodywork sorted at the same time.

Oh yes, I completely forgot about yesterday's (not to mention the week before) uncontainable excitement from work.

So far we've been given a rubber and a pencil. Then last friday everyone got a small pad of paper instructing us all to "take note". I say small - it's only a few inches on each side, but about 500 sheets thick! In combination with the pencil it's actually rather useful... that is until the pencil wears down, because we don't have any pencil sharpeners (nor for that matter does work have a stationery cupboard to raid - managed offices, remember?). So a few of us were predicting that the next present would be a pencil sharpener, perhaps labelled "sharpen your skills".

Yesterday what is probably the final present arrived... and it was not a sharpener. Nor was it indeed any kind of stationary. Instead it was a deconstructed foam cube labelled with merger buzzwords, thus completely breaking both the theme of being stationery-related and the theme of the words being related to the thing they're on. Just when we thought we had marketing's theme sussed as well.
Collapse