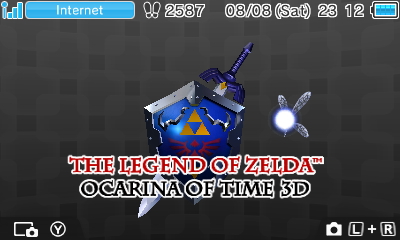 Since the other week I'd sat down and frankly annihilated Majora in all its forms (Fierce Deity mask for the win!), I decided that it was time for another game. Hence I now have a 4th version of Ocarina of Time (N64, Gamecube Zelda Collector's Edition, Gamecube Wind Waker bonus disc, and now 3DS version), and just like Majora's Mask it is full of nostalgia. This was one of the games that once upon a time convinced myself and

la_belle_laide's Hero series on fanfiction.net (of which I have a copy saved before it disappeared, and every once in a while end up re-reading it).

Anyway, the 3DS version. Blogging my Majora's Mask progress turned into epic fail so while I intend to blog about Ocarina of Time, don't expect much success here.

So far I've entered the first dungeon, splatted Gohma (unlike

elemnar's attempt - her overcaffeinated viking approach generally results in the first boss splatting her), and have now left Kokiri Forest and made my way to Hyrule Castle Town. The advantage of having played this game many, many times before is I know what to do and where to do it, though even now I'm finding odd new bits and pieces. Today's random example is in Lon Lon Ranch - go upstairs to the bedroom and smash the pots. Behind a couple of them there's a drawing on the wall. I never spotted that before - it may be new to the 3DS, or it might indeed have been in the N64 version (there's a similar drawing outside Link's treehouse that was in the original version). Hmm, I may dig out the N64 and have a look...

Since I'm sitting in front of the laptop and have Semagic open, here's another post!

Another recipe that I promised

elemnar that I'd write up, again based on something on the back of a packet from Tesco's (their food isn't as nice as Sainsbury's, but they do have some good recipes):

Cook the tagliatelle for about 5 minutes. Drain, then return to the pan. Add the cream cheese, milk, and smoked salmon, and mix through heating until the cream cheese melts. Simples!

It goes quite well with a rocket salad. Tesco's recommended adding some chives as well, but I use dill as that's what's in my herb cupboard.
Collapse