Crazy moments when driving back from Billingshurst just now (which ended up taking exactly an hour start-to-stop, so I was right with my estimate):

Discovering that the A29 south of Pulborough has been resurfaced, and has no markings or cats eyes at all. Did I mention that this was at night, in the pouring rain? It wasn't quite on the scale of

pleaseremove's epic "where's the road gone" moment as I could still see where the nearside was... just not where the rest of the road went. Oh, and to add to the fun there were several deep puddles on the nearside trying to grab the steering and throw you into the ditch. Fortunately the Alfa is STRONG against such puddles and just kept following the road.

Cresting Bury Hill to find proper fog. Not the half-hearted fog that

elemnar and I discovered on the A264 towards Horsham, but proper main-beam-will-blind-you fog where you can only see a short distance ahead - and that's with the front fog lights on.

And finally, discovering deep puddles along the central reservation of the A27 just past Chichester. While overtaking a slow box van. While accelerating hard to clear the traffic behind me that also wanted to overtake the van. Again, the Alfa is STRONG against such and did not fling itself against the crash barrier or van, but pretty much went the in the direction I held the steering wheel.

Aside from that it was actually quite a nice drive. The approach to Pulborough was alright, as was heading through the villages between there and Bury (aside from the driver behind who wasn't entirely happy with me keeping to the speed limit), and once I escaped the Chichester roundabouts the Alfa just cruised along the dual carriageway despite the rain and wind.

Car check time! I did this yesterday in a bit of spare time while waiting for my lunch to cook.

Nothing to report, really - the main tyres were all bang on for pressure, the spare was down .05 bar which I decided wasn't worth the hassle of digging out the compressor. The new pressure gauge makes this check a lot quicker! I also checked the tread depth while I was at it, which worked out at around 6mm left (give or take a bit). That's still plenty of tread, as the UK legal requirement is 1.6mm (not that I intend to let the tyres get that low before replacing them, especially given the sort of weather I end up driving in).

It also doesn't seem to have used up any oil over the past month, though that may be down to the low mileage - since the last post, I've only done 239.3 miles. That said today's driving will have blown all the cobwebs out of the engine and probably evaporated away any petrol contamination in the oil, so it may well need topping up again at the end of the month. I've noticed that it seems to alternate month-by-month between drinking a bit oil and hardly sipping it.

Today the family ended up doing a spontaneous outing to Arundel, wherein after pottering round the town we continued up the hill and into Arundel park. There we passed the curious Hiorne Tower before following a chalk track down the hill and doubling back towards Swanbourne Lake. The path heads through an odd landscape - it's as if there's far too much land there, with the rolling hills and curving tracks. One almost expects the Riders of Rohan to crest one of the hills and thunder down the valley.

I've a whole collection of photos that may appear one day, but the one that caught my eye for today's post is of the small white blobs of sheep, up on the far side of the valley. 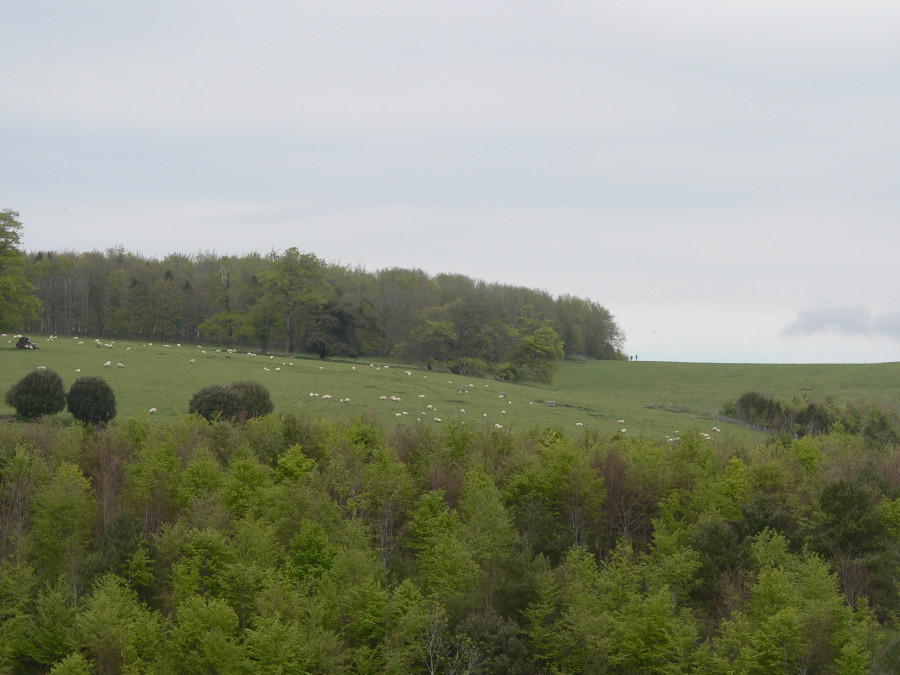 And really finally, before I forget today's hilarity was attempting to pay for lunch. Normally when paying by debit card in the UK, the chip'n'pin machine will prompt you to enter your PIN. Actually signing when paying is almost unheard of these days, though occasionally happens if the chip has died in someone's card (which will also mean that you have to swipe your card rather than just slot it into the machine).

Today it didn't prompt at all - instead it quickly flashed up "Authorised" on the screen before saying "Please remove card"... and then printing out a space for me to sign. We all thought that was rather odd, but I signed it anyway (with a pencil, as the staff didn't have a pen!) and left it at that. Then a little while later I checked the receipt out of curiosity and spotted that it said "Refund". And that instead of "Please debit my card", it said "Please credit my card". It appears that the waitress had somehow put through my bill as a refund by mistake!

Well, myself and the GNU went back to try and work out what had happened and if necessary actually pay for lunch. The waitress was as surprised as we were by the whole thing, but in the end decided to undo the refund with an equal charge, then repeat that for the actual payment. Except on the second payment, she accidentally put it through as a refund again! This time she caught it and managed to cancel it, and then finally correctly entered the payment for lunch. I now have a collection of receipts for various states of credit and debit transactions, and probably have a rather confusing bank statement to look forwards to at the end of the month.
Collapse