In the meantime, I should report on the other upgrade that I've done to Aether: replacing the WiFi daughterboard, which I did after finally getting the new SSD to boot.

About the only thing I got wrong with the spec of the R50e that I had at university was not including onboard WiFi. Instead I thought that I'd be smart and, since I already had a 802.11b PCMCIA card, I'd just reuse that and so save a bit on the cost of the laptop.

Three WiFi cards and many years later... no, that wasn't that smart a decision. Having to stick a card in the side of the laptop just to use WiFi is awkward, and it leaves a lump sticking out which will eventually get broken off at which point you now have no Internet.

The Gnu, on the other hand, was smarter when he spec'd out his R50p and included onboard WiFi in the form of an Intel 2100B. It's one of the reasons why I happily switched over to it when he passed it on to me, as it's just so much more convenient. There was a slight downside though in that it's only 802.11b (top speed 5Mb/s on a good day), but that's generally fast enough for web browsing.

I'd previously tried upgrading to a spare Netgear WAG311 (officially a PCI card, but in reality a mini-PCI card in a mini-PCI-to-PCI adapter - that was quite common in the early WiFi days). This is slightly tricky as the ThinkPad BIOS has a whitelist of authorised mini-PCI and refuses to boot if it detects a different card... but there's a fix in the form of patching out the check in the BIOS. While the card worked it didn't support WPA2 and so was unusable in my network.

This time I did some more research and managed to find an Intel 2915ABG, which not only is capable of a/b/g connections but also supports WPA2 and is on the official support list. I even managed to find one with a correct FRU part number, for all of £13 (including postage!) from eBay: 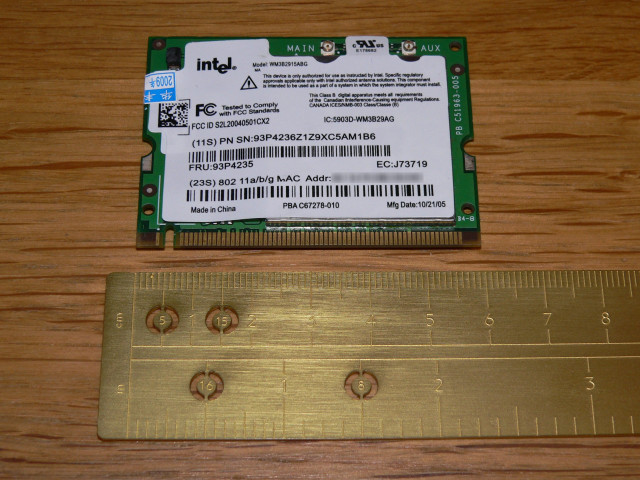 Physically swapping the card is straightforward - just remove the keyboard and bezel, unplug the antennas, unclip and remove the old card, clip the new one in, reconnect the antennas, and put the laptop back together. And this being a ThinkPad there's no need to play "guess which screws to undo" - the Hardware Maintenance Manual lists all the steps.

Anyway, upgrade done, and now for the NUMBERS!

Before pulling the old card out, I did a very rough-and-ready speed test by pointing Firefox at speedtest.net and letting it rip. Running a speed test across the Internet is normally entirely the wrong way to test local network performance, but I knew for this test at least, my Internet connection would not be the weakest link:

Yep, that about the best one can expect for 802.11b WiFi. Theoretically that could do 11Mb/s, but generally you need to de-rate WiFi connections by 50% for a real-world max speed. Anyway, enough of that. Time for the new card, running in 802.11a mode:

That's more like it. My Internet connection can and does run faster than that, but probably not in the evening when the universe is watching Netflix. The file transfer from the NAS is a better indication of true speed.

This has nothing on what Nyx can achieve, though it's hardly a fair comparison as Nyx has a 802.11n card with about 5 years of signal processing improvements. Still, it's a significant improvement over what Aether had before, and interestingly it also came with a decrease in power consumption - about 0.7W when idle, and a whole watt when running the actual speed test. Result!

Of course, there are some slight issues... most noticeably, the WiFi LED no longer lights. The consensus online is that this is due to a slight pinout change. The original Mini PCI spec had both sides of the LED connected to the card connector. However laptop manufacturers wanted to add a physical radio kill switch, and the way they chose to implement this was to change one pin from being the negative LED output to being the RF kill input. They then only connected one side of the LED to the Mini PCI connector and grounded the other side, so the card drove the positive output only. The upshot is if you fit a new card to a laptop that predates this change, nothing drives the negative LED output. The fix is to ground pin 13 on the Mini PCI connector, but without grounding pin 13 on the card that's plugged in (otherwise it thinks the radio kill switch is on). Simples (not)!

This will all be for naught though unless I can repair that screen...

So you may remember that when the graphics card in Nyx failed, I mentioned that it might be repairable? Well, the repair I alluded to is to attempt to fix any failed solder joints... by baking it in an oven at 200°C for 10 minutes. Seriously! There's no end of forum posts and Youtube videos suggesting this as a fix for failed graphics cards, particularly nVidia GeForce cards around the 8800GT mark (the Internets suggest that nVidia skimped on the solder and/or underfill quality for BGA chips, and the thermal stresses from repeated power up/down cycles eventually break one or more solder joints), and most people who claim to have tried this have reported success.

The physics for this checks out as well. Essentially what I'm trying to do is emulate the reflow soldering process used to make the card in the first place, which when you get down to it is basically "bake it in an oven", but with much better temperature control. The aim of reflow soldering is to heat the card up to the point at which the solder melts and flows - much like with a soldering iron, but heating every solder joint in one go - and the temperature needed to melt solder is around 200°C depending on the particular alloy used. Real reflow ovens are ridiculously expensive pieces of kit, but there's many alternatives - SparkFun use a skillet, while Mike's Electric Stuff suggests using a Sainsbury's Basics toaster (removing the pop-up mechanism recommended unless you want a SMT desolderer...). So it's not too far-fetched to imagine doing this with an ordinary oven.

Since the card is still cooling down, it's now time to turn my attention to the heatsink.

All that remains is to tighten everything down, reinstall the card, and hope for the best!

It actually worked! Cooking a graphics card actually fixed it!

Of course, nothing ever goes right and now I've discovered that one of the keys on Nyx's keyboard has failed.

Specifically, the letter U.

As it happens I do have a spare keyboard, however it has a European AZERTY layout and so is rather confusing to use when the computer is set to QWERTY (I can type on it as long as I don't look to see which key I'm pressing!). It's also got a horrid spongy feel to it, unlike the one I normally use which is a genuine mechanical switch-per-key model that dates back to the Windows 3.1 days.

Unfortunately there seems to be this massive gulf in the market between cheap nasty membrane/dome-switch keyboards at the low end and crazy expensive gaming keyboards with more bling than a chav's car. All I want is a decent switch-per-key model with a full-size layout, but I'm struggling to find one where I'm not having to pay an extra £50 for RGB backlighting or replaceable keycaps that I don't actually want. It's widescreen laptops all over again, where the marketroids have decided that what they think consumers want is more important than what consumers actually want and consequently ignored an entire market segment.
Collapse