I've been umming and ahhing over upgrading Aether (a ThinkPad R50p laptop) probably since this time last year. On the one hand, it's over 10 years old and struggles with the JavaScript monstrosities that form the modern Internet. On the other hand, I can't quite justify the cost of a replacement given that I don't use it much these days. And on the third hand... it's actually a very nice machine to use and would be quite hard to find a decent replacement for.

So at the weekend I finally decided that if I wasn't going to buy a replacement, I'd at least buy a couple of useful upgrades. Upgrade the first was replacing the slow hard disk with a SSD, since SSDs make everything go faster (it always used to be that the most cost-effective upgrade on any computer was doubling the RAM - these days, I think the most cost-effective upgrade is adding a SSD). My choice of SSD is a 256GB Plextor PX-M5M SSD (basically, the mSATA version of what I fitted to Khaos/Nyx back in March). There's something just wrong about being able to fit 256GB of solid storage on something this small (let alone the 512GB that's now available!): 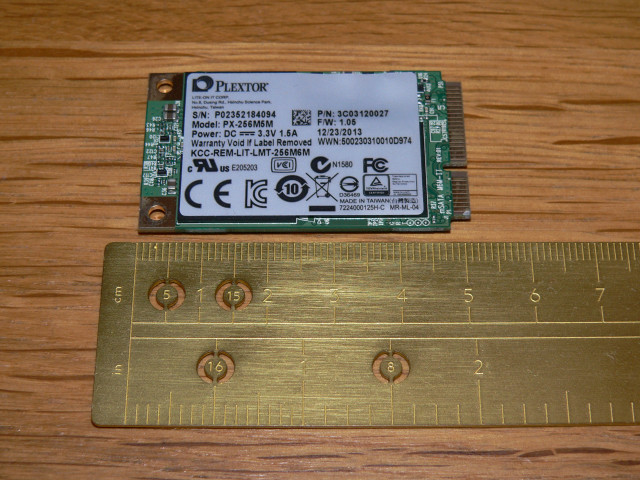 Now Aether doesn't support mSATA, let alone SATA, so I needed an adapter. Or a 2.5" IDE SSD (which do exist), but I didn't want to spend a lot of money on upgrades that'd only be useful in Aether. So I also picked up a Lycom ST-173-7 for a tenner: 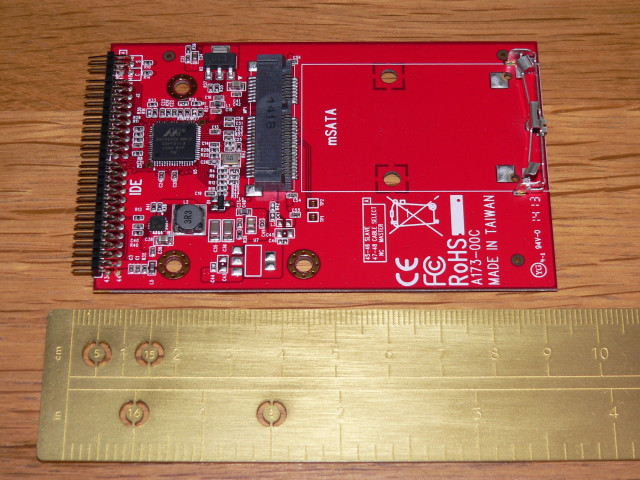 And yes, I did take the mounting bracket off to see what was inside. The answer is not much, though it looks like there may be an actual DC-DC converter in there - that's good for power draw, as the alternative of a linear regulator wastes power. The result is complete overkill for Aether, but being mSATA I can trivially fit it to whatever the eventual replacement will be. 
This only took me what, three evenings to get working? Anyway, now for the important part: NUMBERS!

Before starting all this I ran HD Tune against the old drive (a 5400rpm 160GB Hitachi HTS541616J9A - so basically your typical laptop HDD) to get a baseline figure: 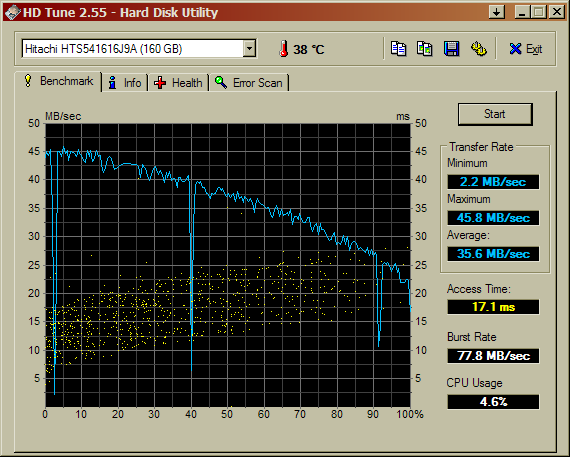 I ran this a couple of times to try and get a clean graph, and both times had the sharp drop at the start. Probably there's a few reallocated sectors there. For reference, here's what the desktop drives looked like.

I did the test while on battery to get some idea of power consumption. Turns out there's no significant difference in total system power draw, which is mildly disappointing as I was hoping to get improved battery life out off the SSD (that said, the increased speed should help with this - the more time spent in an idle state the lower the average power draw). There was, however, a bit of an improvement in performance: 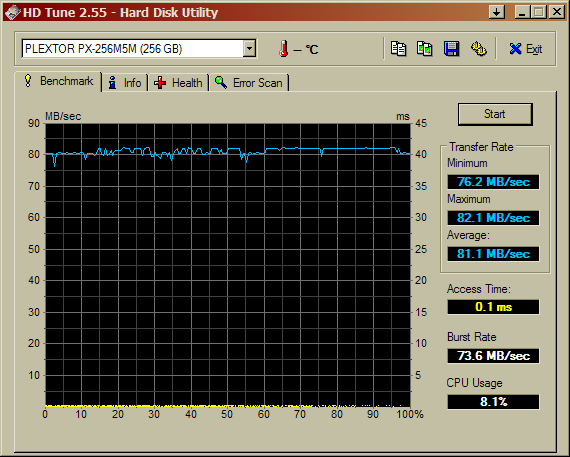 This merely qualifies as "fast" - as I said, the drive is epic overkill for an old laptop and is pretty much saturating the 100MB/s PATA connection. The adapter could theoretically do 133MB/s if the laptop's controller supported it, but the drive itself is rated for a crazy fast 540MB/s read and 430MB/s write.

That said, the near-zero seek time will give by far the most impact on performance. Certainly the laptop now feels a lot more responsive - where before it seemed to spend ages doing hefty random access, now there's just the odd flicker of the disk light.

The weirdest part of all this is how quiet the laptop is. It's genuinely eerie working away on a truly silent computer. The loudest part now (aside from the fan, but that only runs when needed) is a faint buzz from the backlight inverter, with an even fainter hum from the power circuitry. You can almost tell how hard it's working by the change in pitch of the hum.
Collapse