And I'll start with a real post, albeit a slightly delayed one: I have a car! As mentioned earlier it's not the normal choice for a first car... but normality is boring. So instead of getting a cheap little Peugot or VW Golf or something to run for a year or two, I got this: 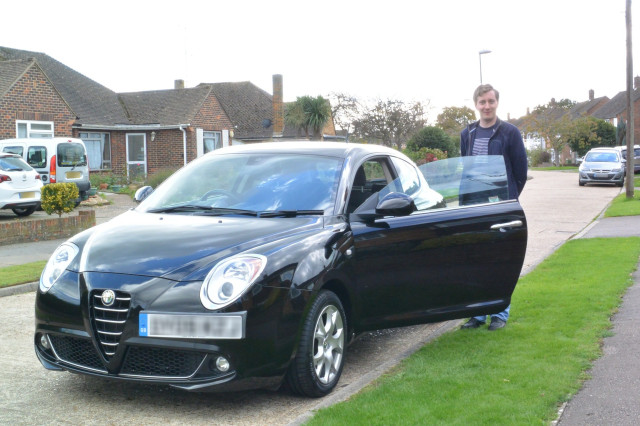 Yes, it's an Alfa Romeo MiTo. Specifically the 2009 Lusso variant, with a 1.4l 95hp petrol engine. I picked it up from Paul (of P&K Autos in Newick) two weeks ago, and since then have done more than a few miles in it.

How I ended up with it was rather amusing - the Gnu and I had turned up at the garage and had spotted a Suzuki Swift in the showroom that looked like a good choice, when Paul mentioned that he had another car in his workshop that had only turned up the day before. This car, in fact, which he'd been saving to surprise me with. I was torn between the two - the Suzuki was quite a bit cheaper, and would have been much more convenient for driving around town... but quite simply the MiTo is an Alfa. Additionally while I've only done a little fast driving in my instructors Ford Fiesta (there's the short stretch of 60mph road we sometimes used), it always felt not entirely stable at that speed.

allegramente's Alfa 147, on the other hand, would merrily accelerate up Bury Hill with no fuss at all and felt completely stable on the twisty turny A-roads that Sussex is full of.

So in the end despite the extra couple of grand and the more expensive insurance (though only slightly more - it's apparently considered a good first car by insurers), I plumped for the MiTo and haven't regretted it. Like the 147 it cruises along country A-roads and stays glued to the road on the bends, and is just plain fun to drive.
Collapse