My family has never quite done "normal". Occasionally we feel the need to remind the world of this.

And so last Sunday we stuck L plates on my mum's car, and I drove it most of the way from Horsham back to Fareham, going via Billingshurst and Pulborough, over Bury Hill, and through the serial roundabouts that make up the Chichester bypass. Now, driving their parents' car would be a perfectly normal thing for any young(ish) learner to do. Except we don't do normal, and this extends to cars... 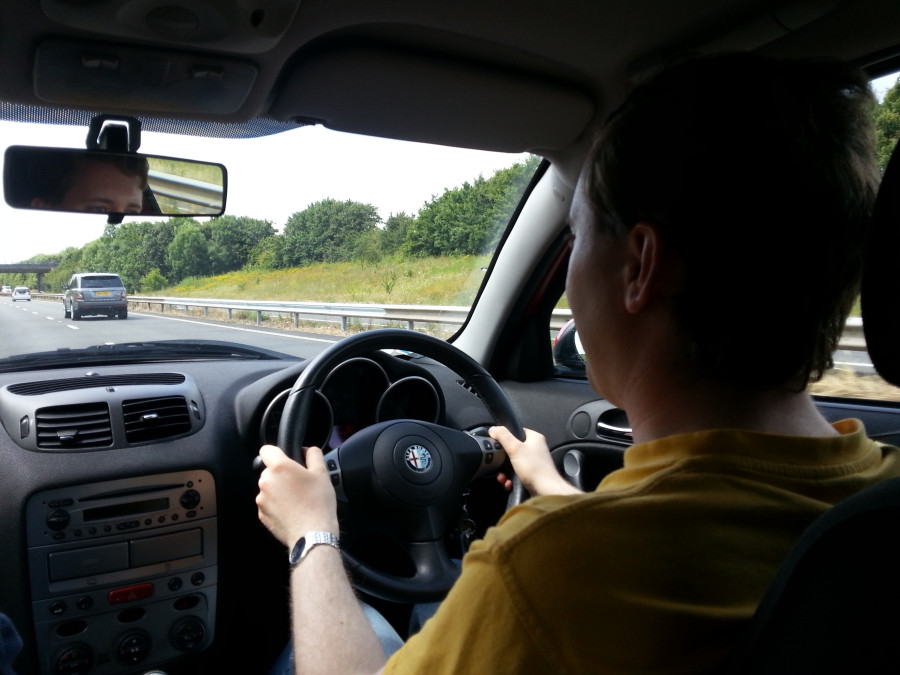 That's me, sitting in my mum's Alfa Romeo 147 2.0 TS, trundling along the A27 somewhere around Chichester. It's a bit of a jump in power from the Ford Fiesta 1.0 EcoBoost I've been learning in! Amazingly insurance wasn't stupidly expensive - the AA do a scheme where your instructor can give you a referral code for short-term learner insurance from Collingwood, and a little under £100 covers me for 28 days.

The roads were very different to the ones I usually encounter in my lessons. There's absolutely no fast dual carriageway roads anywhere near me (that 50mph stretch on the way out of Whiteley doesn't count, by the time you've reached 40 you have to brake for the lights at the next roundabout), and only one fast single-carriageway road which only lasts for a mile or so. The A29, on the other hand, follows the ancient Roman road of Stane Street near Billingshurst and so is a dead straight 60mph road. Even going over Bury Hill the road meanders nicely with flowing corners, and the Alfa would happily take the lot at 60 if I let it. And then after that, it's on to the A27 and my first experience of a 70mph dual carriageway - and yes, I did reach 70!

It's also a very different car to drive to the Ford, and obviously has a fair bit more power. Case in point: leaving one roundabout on the Billingshurst bypass where I would have probably been doing 20mph or so in the Ford, the Alfa was accelerating through 40 (fortunately on a 60mph stretch of road!). It's also a lot more forgiving of being in the right gear and having the right amount of power than the Ford is with its little turbocharged 3-cylinder engine. Unlike the Ford however, the gearbox is incredibly stubborn and vague - when going for 3rd gear I was never quite certain what I'd end up in. And of course the throttle response is completely different, as is the biting point on the clutch (and there's a definite lump of resistance in the middle of the clutch pedal travel), and so gear changes at least to begin with were rather jerky. All that aside though, it's just plain fun to drive - while it's content to trundle along at 50 or so, deep down the Alfa just wants to go.

I have to admit, while the sensible post-learner car to get would be something on the order of a Nissan Micra, there is a part of me that's tempted by an Alfa...
Collapse