I've just received some paperwork with the following:

Please indicate your acceptance of the attached [_________________] by signing, dating and returning, both copies. Upon receipt [_____] will return one copy to you, singed by both parties for your personal record.

Does this mean I have to ritually burn it as well as signing it?

Both solar mosaic jars stopped working over winter - I think they didn't get enough sunlight as the batteries are completely flat - so I've taken them in and put the batteries in a separate charger. While I was at it I discovered that the bronze one wasn't as waterproof as I thought it was, and that water has seeped around the solar cell and merrily corroded the circuitry inside. So since I've got it open I had a go at cleaning the worst of the gunk off, and discovered this had happened: 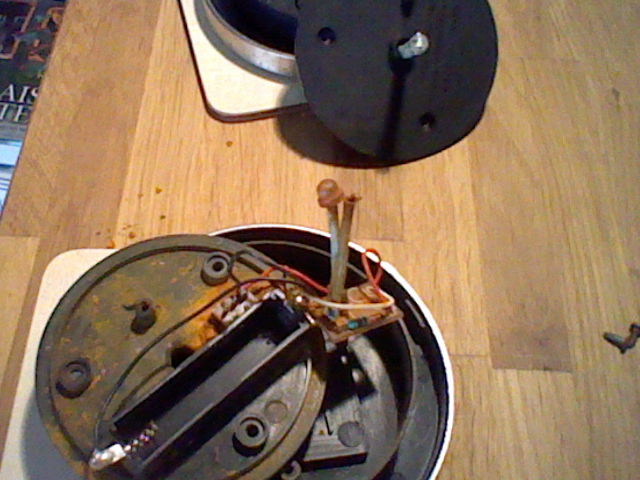 It appears that the reason this one wasn't working was because the wire for the LED had broken. In fact, it's not so much broken as had a few mm of the wire corrode into nothingness: 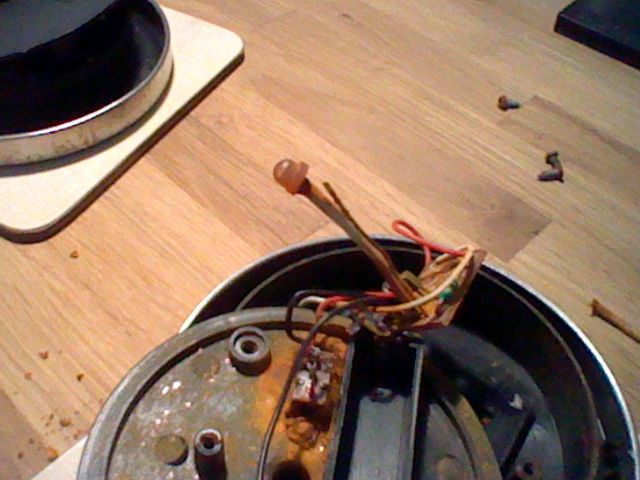 There's no chance of being able to solder a replacement wire on as there isn't anything left at the LED end - I'd just melt end up melting it. That's a rather terminal failure unfortunately as it's just not practical to try and find a replacement LED (it's an unusual one with a wide viewing angle and extra-long leads, not to mention I've no idea what the forward voltage/current of it is). Hmm... maybe if I ask Lakeland Plastics nicely they'll be able to sell me a replacement top for a jar, or even just the PCB/LED assembly...

...and today's discovery is that while I was away over the weekend, the breaker for the immersion heater tripped. That's new.

Of course, I discovered this by wanting to do some washing up and finding that a) the pump wasn't working (it's on the same circuit), and b) what little water was coming out of the tap was cold.

The heater has been a bit temperamental and more than once I've had to reset the over-temperature cut-out on it so I wonder if something has finally failed. In any case, it can wait until tomorrow when it's still light outside and so it's less of an inconvenience if my usual troubleshooting approach (reset breaker, see if it trips again - if it does then it's definitely failed) takes out the lights as well. Though it may well just be one of those things rather than an actual failure - MCBs do have a tendency to trip on very short faults, like the momentary short-circuit from a failing halogen light.
Collapse