I've been playing a lot of Pokémon Go while out on walks, and experimenting with the AR photo mode... 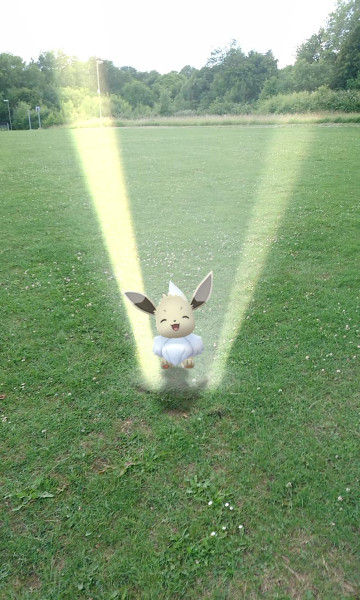 pleaseremove and I, discussing moving Windows activations to new hardware...

pleaseremove: ...it'll work up to when a tech looks at it and spots that all the hardware has changed

boggyb: ah, but the drive is the same

pleaseremove: *splutters with laughter* that's the only thing that is! 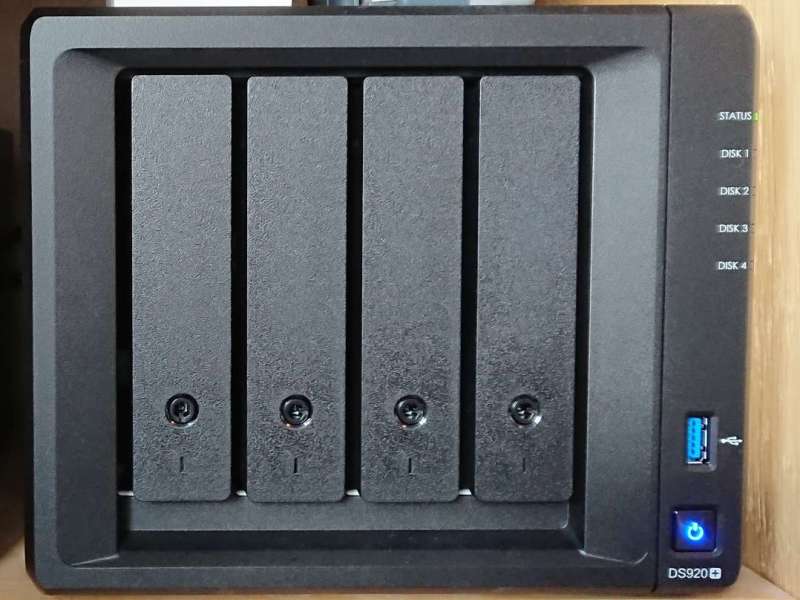 For about a year now I've been mulling over various computer upgrades - the first of these was buying the laptop just over a year ago. But that was only step one on the grand plan to upgrade all the things, and now the next steps have happened.

As with many things there was a particular trigger for it, and in this case it was my browser refusing to talk to Athena (a ReadyNAS Duo V1) because it only speaks TLS 1.0 and the browser makers have all decided that TLS 1.0 is completely broken and cannot be used anywhere. Nevermind that this is a local network and the NAS admin page is not exposed to the internet...

Anyway given that Athena was a decade old, it was long overdue an upgrade to something a bit faster. And after much pondering, I settled on a shiny new Synology DS920+! It slots neatly into the shelves that make up the comms tower in this flat and is a fair bit beefier - it's got a quad-core 2.7GHz Celeron J4125 with 4GB RAM, against the single-core Sparc chip and 256MB RAM in the old unit. This will help with other plans to turn it into more than just a NAS.

Setting it up was straightforward: power it up, feed it a drive (a spare 3TB one that used to live in Nyx), wait a bit while it installs DiskStation Manager, and then start configuring! The Synology software is a lot more capable than the ReadyNAS RAIDiator firmware and I can see I'll have lots of fun getting it tweaked just how I want... but in the meantime, the immediate challenge was to migrate from Athena .

My end goal is to load out Caerus with 4x3TB drives, probably as a pair of RAID-1 arrays (RAID-5 is just asking for trouble these days once you get past a few TB per drive, and RAID-6 with only 4 bays doesn't have any benefit over RAID-1 or RAID-10). I do have the drives, but there's one small problem with it: three of them are currently in Nyx (the desktop) and won't be removed until that gets upgraded. So as a stop-gap I'll reuse the 2x2TB drives from Athena, but those have data I want on them and the ReadyNAS RAID format is different.

So, my cunning plan to migrate without losing redundancy is this:
1. Fit the initial 3TB drive in Caerus, and configure it as a single-drive SHR volume
2. Copy everything from Athena to Caerus
3. Move one 2TB drive from Athena to Caerus, and configure that as a second single-drive SHR volume
4. Within Caerus, copy everything from the 3TB volume to the 2TB volume.
5. Move the second 2TB drive (decommissioning Athena), and expand the second SHR volume onto it (which will turn it into a RAID-1 array)

Carrying that out was mostly straightforward, apart from step 2: I couldn't find any commands in DSM that would pull data from another location (there's plenty of backup options but they're all based around backing up this NAS to somewhere else, or working in combination with client software). So instead I created a backup job on Athena to push the entire volume across (over NFS, because I couldn't get the rsync connection to work) and left that to run overnight. Everything else went as expected, including Athena emailing me when I pulled the first disk (good to know that works!) and the copies within Caerus, and now I have 5TB of partly-redundant storage and a whole pile of addons to play with. I have plans for Caerus...

So I actually wrote most of this in November last year... but never got round to posting it. Anyway, since people have been asking for more posts - here, have a random Zelda post!

Far away... Do not fear—dash and fly!
Owl Statue

So a random tech update that may help someone else trying to make 4G modems work...

When I ordered my shiny new X390 Yoga, I specc'd out a 4G modem as well - a Fibocom L850-GL (also known as an Intel XMM7360-P because integrated 4G modems are weird). I included it partly because it could come in handy, and mainly because it's not practical to retrofit one later - while the M.2 connector is present, if you don't specify a modem then Lenovo only fits WLAN antennas and swapping out the antennas is a dismantle-the-entire-laptop job. Anyway, since going on holidays is a thing that may actually happen this year I picked up a random SIM card from Sainsburys and stuck it in.

Whereupon the modem woke up, detected the SIM card, and promptly disappeared from the PCIe bus. A few moments it reappeared, detected that it was a Vodafone SIM... and disappeared again. It then got stuck in this unplug/plug loop.

After much digging, it turns out that there's a whole pile of different network-specific firmwares that need to be loaded. When you insert a SIM a background service will detect this and switch the modem into firmware upgrade mode. It's then supposed to install the firmware, the modem restarts, and everything is shiny. Except it failed to actually upload the firmware to the modem and then decided to try again when the modem reappared.

The release notes claim this was fixed in driver version 2.0.1.91 and indeed that's what appeared to be installed. Except for some reason the update hadn't installed the new firmware - the firmware and service live in C:\Windows\Firmware and the files there were not the ones in the driver package. 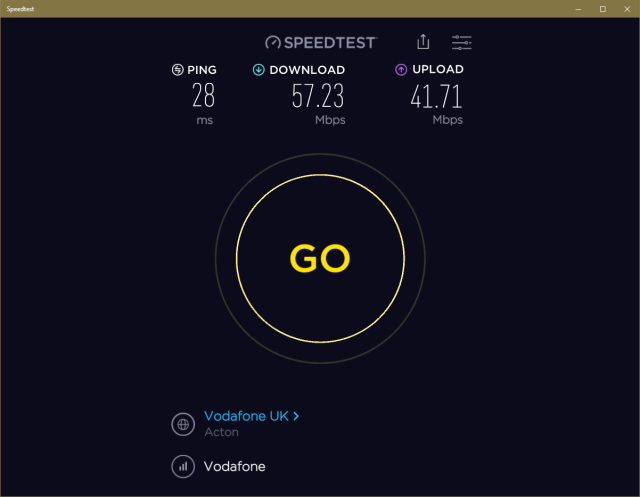 Not as the fast as the modem theoretically supports, let alone what my phone can do (the Xperia XZ1 has a 1Gb/s modem, which is an utterly ludicrous concept for mobile data), but I'll take that. Result!

So I was watching the F1 on TV just now, and what should appear but an advert by the government attempting to explain why they think Brexit is a Good Thing. Though I'm not quite sure what their point was - it was 30 seconds of lots of people in different industries making arrows, and a little bit at the end about how we all need to check what's changing.

So no useful Brexit advice as usual then.

boggyb's phone: *bingely-bingely-beep!* Your Amazon order has been delivered! The parcel was handed to resident!

Is "handed to resident" some sort of euphemism? Because it wasn't handed to me, nor is it in the hall or outside the door to the flats.

Anyway, sometime later I headed out for a stroll and happened to glance over at the neighbouring flats. And outside their side gate... was my Amazon parcel.

Sadly Amazon's how-was-your-delivery feedback doesn't have a "you left it outside the wrong house in plain sight on a busy footpath" option.

...but let me address the argument made by some Members that if a Member is not able to vote, they will be entirely disenfranchised. I do not accept that. There are many other ways in which MPs represent their constituents in Parliament...
The Leader of the House of Commons (Mr Jacob Rees-Mogg), Proceedings During the Pandemic, 2/6/2020

disenfranchised
adjective
not having the right to vote, or a similar right, or having had that right taken away
Definition of disenfranchised, Cambridge English Dictionary

Random comment from an American friend at virtual pasta night last Monday, chatting about the clusterfuck that is Dominic Cummings-gate:

"Y'know how you use American politics as escapism? We do the same with your British politics."

Not even the Coronavirus can stop the madness that is the Eurovision Song Contest! The official console has been cancelled, so instead we've got "Eurovision: Europe Shine a Light" which is a collection of the performances that we would have had if the contest was going ahead as normal.

And, of course, another highly inaccurate liveblog!

We begin with... a wall of Zoom streams telling us it's another year?

Oh, it's going to be rapid-fire songs with 30seconds of each one, followed by a (sometimes very heartwarming) message from the artists. Get ready!

First up: an acoustic version of "Heroes" from 2015. This was impressive enough when it won, but somehow the unplugged version is better. And the NHS (and everyone else helping to keep the world turning) are very much the heroes of our time.

The next song... something about this really sounds like it's a Christmas carol of all things. And finally a bit of guitar playing that's all Italian to me. Impressive Italian, to be fair.

Serbia get to re-run their 2007 win, carefully socially distancing in the middle of the road. Followed by another zoom video wall, with most playing but the occasional stream of someone looking awkwardly at the screen waiting for their cue as landmarks dramatically switch the lights on

And we get an extra special interlude (because the BBC doesn't do commercials), with a collection of Eurovision party photos.

Unlike Serbia, Germany's 1982 entry has been moved inside. To the middle of a staircase because why not?

What, no lucky cats? Very different to the usual Netta performances.

Netherlands now with last year's success. And they're scrounged up the EU's entire stock of tungsten lightbulbs for the set design.

And now a collection of short messages from past winners and runner-ups. But no trolls?


And that's all 41! There's no voting, which means no winner but more importantly no "nil points" for UK!

Instead our very own Graham Norton is put on the spotlight (on the UK commentary, after the interview he said "God that was awkward!"). Finally we end with yet another classic rerun - this time a rare UK win from 1997.